Home to Work: Meet Richard Thompson from H A O’Neill

CNI in association with CIF are running a series of interviews with returned emigrants who have come home to work in the industry in Ireland – why they left, why they came home and their hopes and fears for the future. Through this, we hope to give insight into the expectations they have about working in Ireland, what motivated them to return home, and discover what Ireland and the construction industry can do to attract valuable personnel back to Ireland.

Today we speak with Richard Thompson of H A O’Neill, Mechanical HVAC and Process Piping Contractors -part of the Jones Engineering group.

Richard is a plumber who spent nine years living with his wife and children in Perth, Western Australia. After eight years working the family sold their home in Perth and travelled around Australia for a year, home-schooling the children, before moving home to Ireland.

Construction Network Ireland talked to Richie about the good and bad of living abroad and moving home – while the work situation has been very positive since coming home, the problems getting a mortgage, the cost of motor insurance and the cost of living in Ireland generally have been a challenge. 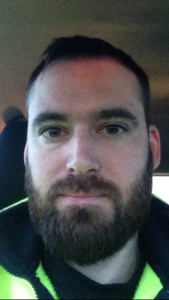 How did you get started in the construction industry?

I did an apprenticeship and worked for eight years in Ireland as a plumber before I emigrated. Thankfully the time that I was working in the industry in Ireland, things were booming from start to finish, so emigrating was a very different prospect for me than it was for a lot of people in that respect. I almost didn’t leave Ireland at the time there was so much work!

So what was it that prompted you to move abroad, what was the impetus?

I’d just always wanted to live abroad, to see a bit of the world and to live work in a hot country appealed to me. I have family living in Singapore and I always liked the look of their lifestyle, and I had always wanted to backpack around Australia. I had a child when I was doing my apprenticeship, so that went out the window for a few years.

I remember there was a seminar in the RDS where the Australian government was trying to attract Irish tradespeople to live and work in Australia in 2005. I went to it and was really interested, but I put it on the long finger for a couple of years before we began to prepare for it seriously in 2007.

As myself and my partner had a young child, instead of just going for the year we applied for permanent Australian residency while we were in Ireland. We got it, so it meant that we had the right to live and work there for 5 years, which was good to know when we were going over.

Did you have a job lined up when you were going over?

I didn’t, no, but I had my working Visa and my permanent residency. When we got over there we ended up going to Western Australia because we had heard that was where the jobs were. Right enough, when we got there you almost couldn’t not get a job it was so easy, much the same way it was here when we left.

Once you were there, did you settle into life pretty quickly?

We really did, and sure enough, a year wasn’t long in going by. Being honest, the recession in Ireland really didn’t stop us coming home because we didn’t want to come home.

How long were you in Australia for and what prompted you to move home?

We were there for nine years and by year seven we were thinking ‘will we end up staying forever, or will we go home for a bit, even if it is just for a few years?’. My daughter is 15 now, and if we had left it for a couple of more years, we would be settled there.

I think everyone who lives abroad experiences that sense of loneliness, even when you are with someone you love and things are going well, especially when you have kids – their experience growing up is not the same one we had and that was a definite factor in thinking about moving home.

What was the process of moving home for the family?

We were in Western Australia for eight years and because my wife and I never got to do the backpacker thing, we sold our house after eight years, bought a caravan and drove around Australia for a year and home-schooled the kids.

That was an amazing experience for us all – we travelled around the whole of Australia for 12 months, Tasmania included. We didn’t work while we were doing it, so we got to spend all of that time with the kids and see a lot of the country in the way you just couldn’t do if you’re on a short holiday.

After that, we moved back to Perth, sold the caravan and I worked in my old job for a while before we moved home to Ireland.

When you were coming home, did you have a job lined up?

No, we really didn’t talk to a lot of people about it before we moved home because we wanted to surprise our families!

In the last week we were there I did ring my old boss and put out feelers, because I was getting a bit anxious about it – I was wondering to myself it I would manage to get a job. He told me that it would be no problem and that if I didn’t get a job with him I would definitely be able to get a job with someone else, so that was reassuring.

How have you found it since you moved back?

The weather sucks! Ah, it is great to be home, and it is really nice seeing the kids around their grandparents and aunties and stuff, that has been brilliant for them.

Our kids have really adapted to it really well, even the 15 year old, which we hadn’t expected. I think the year of travelling around Australia really helped with that process though and they are pretty adaptable now.

There is a whole load of stuff that you have to go through when you move country, even when you are moving home – paperwork, insurance, taxes, getting jobs – which is all sort of a pain, but I had to do that when I moved to Australia first so it’s just an unavoidable part of the process.

We had a fair idea from moving to Australia what the situation would be like moving home, so we were fairly well prepared for it. I allowed myself a few weeks off work to get all of that sorted. 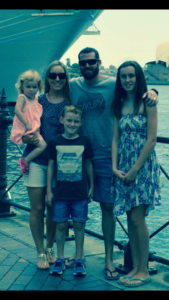 Richie with his family in warmer climates

How have you found the work environment since you moved home?

It’s been really good. I knew I would probably find work easily enough but I wasn’t sure if it would be in the area I wanted to work in. I had been working in domestic plumbing before I moved to Australia, but over there I worked in industrial and since I got home I’ve gotten a job with HA O’Neill working in industrial, which is great.

We’ve decided to come home for at least 4 years so that my eldest can finish school – to give the kids the same culture and some family time for a few years and we will decide then what we want to do. The entire family are dual citizens so we have that option at some point in the future.

Have there been any pitfalls to moving home?

We’re in the process of applying for a mortgage at present and it is taking forever. Thankfully we have my mother-in-law to live with as I wouldn’t fancy having to pay the rents that are going at the moment. It made it a lot easier to have somewhere to move to.

That was one thing we really hadn’t expected to be so difficult, especially being in a pretty good situation financially, having a job and a long history of paying a mortgage in Australia with no missed payments – we didn’t think given all of that, that it would be such an ordeal. The house prices have been a bit of a shock too!

There are a lot of things that are a pain – a lot of insurance companies won’t recognise your no claims bonus from Australia and things like insurance, car tax etc are completely out of whack with what they are elsewhere.

For all of those things I have to say that overall we are really happy with the move home, both from a work and a family perspective.