Increase in Demand in the Dublin Industrial & Logistics Sector in Q3

Prime rents remained stable quarter-on-quarter at €99.50 per square metre (€9.25 per sq. ft.) at the end of Q3, having increased by 6% since the beginning of the year.  Prime rental values are now at levels that justify new development which is leading to increased appetite for industrial land and an increase in planning applications for industrial & logistics schemes over recent months. 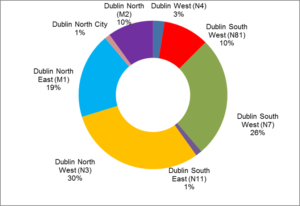 According to Jarlath Lynn, Director in the industrial & logistics team at CBRE Ireland, “The overall volume of demand in the industrial sector rose significantly quarter-on-quarter. There was more than 117,000m2 of demand for industrial accommodation prevailing at the end of Q3 2017 of which 22% was focussed on the Dublin North (M1) corridor in particular while a further 16% specifically expressed a preference for premises along the Dublin South West (N7) corridor. Interestingly, 57% of demand at the end of Q3 was focussed on ‘any Dublin location’ and didn’t have a preference for a particular location”.

According to CBRE, prime industrial yields in the capital are stable at approximately 5.5% at the end of Q3 2017 and are expected to remain stable for the foreseeable future.

CBRE Ireland today released further statistics on the value and volume of development land sales signed in Ireland during the third quarter of 2017. According to the property consultants, 29 development land sales were signed during Q3 totalling more than €187 million between them. This brings the total number of land sales completed in the first nine months of 2017 to 79 with more than €456 million invested year-to-date.