While the networking event and the Dublin Rising panel discussion were reason enough for an early start to the day, it was fascinating for anyone involved in the construction business to see the venue before it opens its doors to HubSpot later this year.

The tech giant has taken a 20 year lease on the landmark building at a reported rent of €6.8 million per year. With its remarkable views of the river Liffey and its blend of old and new architecture, it is what you would expect for the EMEA headquarters of one of the world’s fastest growing tech giants.

The second panel discussion at the WPCI event talked about the process of creating the building and featured panel members who had been involved in the design, construction and leasing of the building.

You may also be interested in Dublin Rising (Part One)

Sharon Lynch has been working with Hibernia REIT as Property Asset Manager for the company’s Windmill Quarter properties since its inception in 2015. She began the panel discussion by highlighting the need for the quarter to deliver buildings that are not just functional space, but that are significant enough in their offerings for tenants to be able to use them to both attract and retain staff.

This means that the strategy for the development doesn’t just consider the infrastructural needs of large clients but also what their staff need. When renting buildings at ground floor level, Lynch said that close attention has been paid to delivering food and drink offerings that will be attractive to the staff of tenants 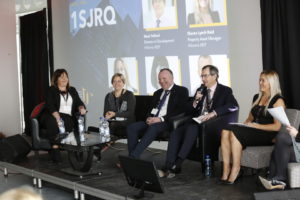 Mark Pollard, Director of Development at Hibernia REIT which owns both 1SJRQ and 1/2WML summarised the strategy by concluding that the consideration for development in the SOBO (South of Beckett O’Casey) district is built around the realisation that “Dublin is now an international city and for us it’s about producing a building and area that can attract tenants on a global scale”.

Eddie Cogan, Contracts Manager John Paul Construction took the audience through some of the challenges that were faced in creating 1SJRQ – the first being the preservation of the historical aspects of the build that were in extremely poor repair and had to be reinforced with steel beams before work on the site could even commence.

Considering the foundations of 1SJRQ were to be even lower than the foundations of the existing buildings that required preservation, the amount of underpinning, reinforcing and other white magic that had to be employed was significant. This would have been enough of a war story for Cogan and the team in John Paul Construction, but their journey didn’t end there.

The survey of the site prior to construction concluded that it was unlikely that anything of any architectural significance would be found, but as luck would have it the entire project had to be put on hold just a few months into construction in 2016 when archaeological remains of a millrace from the early 1800’s were discovered. 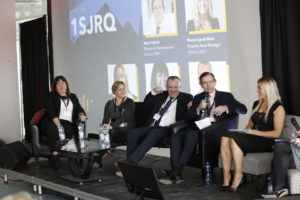 As they dug further even more timbers were discovered. This meant that all construction had to stop – “which isn’t great when you have a crane arriving on site that day” Cogan deadpanned.

There was no time to waste sitting around however – “Once that happened, we immediately had to diversify. We had to go around this change of plan as the building still had to be delivered on time”, Cogan said.

There was somewhat of a silver ling to the delay however, as Nellie Reid of Meehan Green explained.

“The delay on building actually helped us to make some changes that allowed us to achieve a LEED Platinum rating, rather than a LEED Gold rating which was originally planned” she said.

Some of those changes required amendments to the planning permission that had been granted already and the extra time meant that these could be added to the already high-tech build. Reid says that LEED Platinum rating is becoming more important to potential tenants as green credentials become more important to end-users as well as to potential employees.

Reid also explained that the location of 1SJRQ helped the process as a big part of the LEED certification evaluation has to do with site selection. Even though a lot of Green Certification is about how you build the structure, an equal rating comes from where you build it.

For instance, can you get there by public transport? Are there good amenities in walking distance? Is there existing infrastructure which doesn’t have to be created? As the answer is yes to all the above in the SOBO quarter it helps reduce the carbon footprint of the building.

Deirdre Costello, Senior Director and Head of Office Leasing at JLL took the audience through the process of what letting a building of 1SJRQ’s calibre involves and some of the consideration’s clients look for.

As Costello pointed out, everything about the quality of the building meant that it would be aimed at an international market and the rent roll required to make the project worthwhile would mean that Hibernia REIT would be looking for a tenant who wanted the best of the best for their staff.

The quality of the building is something that doesn’t just attract the most successful employers, it also attracts some of the best employees – “In the war on talent, clients are using their buildings as a recruitment tool”, Costello said.

Given all that was on show at 1SJRQ last Thursday, it would be hard to imagine an employee who wouldn’t want to work in this 21st Century icon in the heart of one of Dublin’s most vibrant new quarters