MÓLA may be one of the newer architects firms on the Irish scene, but the firms story is decades in the making.

Meeting Ralph Bingham in MÓLA Architecture’s new office space, situated in the heart of Donnybrook, it’s easy to get a sense of what the firm is about – finding a vacant meeting room proves difficult even at 10am and the company’s 35 staff are immersed in a hive of activity.

MÓLA’s fortunes have changed over the last year and have seen an increase in large scale projects with ambitious programmes.

The firm is also nominated for two of its recent builds at the upcoming RIAI awards, which Bingham says is particularly exciting for the firm which was founded in 2010.

“We are delighted to have two schemes that we submitted to the RIAI Awards shortlisted – one the Holy Faith Spirituality Centre, a really great project for the Holy Faith sisters, and the Diving Bell for Dublin Port.  Architectural projects can take 3-5years to get off the ground and completed, so we are only now starting to see some of the fruits of our labour”, he says. 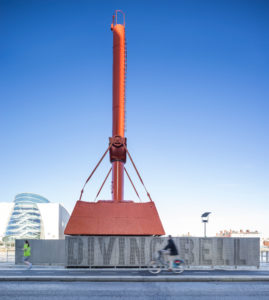 MOLA Architecture are delighted to have been shortlisted for the Irish Architecture Awards 2016 Public Choice Award for both the Dublin Port Diving Bell and the Margaret Aylward Centre Holy Faith Sisters projects. Please vote here

Things were somewhat different when MÓLA opened its doors in 2010 – smaller offices, a handful of staff and a stagnant market meant that the firm had to make do with anything and everything, but has since gone on to develop a stellar reputation for office fit out amongst others.

“When we set up there were very few new architectural projects happening – the market just wasn’t there. One of the areas that was busy during the recession thankfully, was office fit out — In 2010 we won a Google contract and since then have carried out a number of other projects for them. We are currently working on Dropbox’s European Headquarters, and we have worked with Amazon and Smartbox, among others”, Bingham says.

The firm has become a powerhouse in office fit out — in 2015 their Google Dockmill project won an IDI award for Best Fit Out, and last year MÓLA was named Fit Out Design Practice of the Year, reflecting the work it have done with some of the biggest names in Technology, Banking and Airline Leasing.

Ralph says that the ability to pivot from urban design, architecture to interior work allowed the firm to keep the doors open during some of the more precarious times for an architecture firm in Ireland. 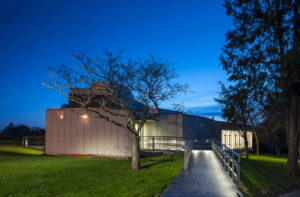 “Fit out has been really good to us. Fit out is abit like sprinting – you start and once one site will be finished in 12 weeks, whereas architecture can be a marathon taking many years to complete. “, he says.

It’s in larger projects that MÓLA has the most experience though, and although the firm is just six years old, it’s heritage goes back much further than that.

The clue lies in the name the fledgling firm chose when it was founded in 2010 by some of the senior architects and former directors of one of Ireland’s largest and most storied firm of architects – Murray Ó’Laoire Architects.

“MÓLA Architecture are six years in business, but Michael O’Carroll and I had about 20 years of experience in Murray Ó’Laoire Architects, which at its peak was one of the largest architecture firms in the country, with offices abroad and had 280 staff. We had been there since we graduated pretty much, and when it closed its doors we had a choice of either going on our merry ways individually, or start something together”, Bingham says.

About half of the team in MÓLA are former staff members of Murray Ó’Laoire Architects, including Seán Ó’Laoire, its founding director, a former President of the RIAI and one of Ireland’s most esteemed and respected architects.

“Michael and I had a lot of experience of working on bigger projects and I suppose we felt that there would be a need for people and firms with that experience in the future. We started in March 2010 and we were lucky that certain clients stuck with us, but 2010-2012 were very quiet years, and for most of that time we were living off fumes, and doing everything and anything” he says.

Bingham mentions luck quite a bit when he talks about how MÓLA has progressed over the past six years and while there is an element of that in every successful businesses development, much of the good fortune he describes sounds more like canny business decisions backed up by an ability to deliver great design to clients.

There may have been an element of luck in getting the first fit out contract for Google, but the tech giant clearly liked what they got enough to return to the firm repeatedly, as have many other prestigious names; and spotting the niche in office fit out while waiting for fresh builds to come on stream can’t have fallen in the firms lap either.

One of many smart moves that MÓLA has made has been in collaborating with other firms on projects which it would not have otherwise qualified for based on its size in the first few years after it was founded.

“Collaboration has been pretty much a hallmark of the work we have done over the last six years as we were relatively small starting out. We worked on the DCU Nano Bioanalytical Labs in conjunction with RKD Architects, a great firm – as we were a new firm we didn’t have 3 years audited accounts or any of the other things that you need in order to go for a contract of that size”, Bingham says.

“We also worked on the master planning of Heuston Station with the eminent UK architect Terry Farrell, with KMD on Crumlin Hospital; we also have a partnership with IA, one of the biggest interior design firms in the US. More recently we have partnered with O’Mahony Pike Architects on Capital Dock and Cherrywood, and with Henry J. Lyons on the Hawkins House and Apollo House development, which I am sure will get a lot of press as it is reputed to be one of the ugliest buildings in the country.   All have been positive experiences.” he says.

Bingham says that managing and consolidating growth is the current challenge and as such collaboration and partnership is a sensible approach.

“We are finally getting projects that require an office of this size, and now it’s a case of managing that growth carefully to make sure we don’t over expand or overstretch ourselves. We have increased our numbers from just seven people initially to thirty-five this year – initially we grew really gradually, but in the last year we have grown from 20 people to 35 purely based on necessity. Our intention is not to grow unsustainably “, he says.

The firm has made some canny moves to grow sustainably during recession and while it has clearly not been easy, the testament to what Bingham, O’Carroll and their colleagues have done so far is clear to see in the two projects shortlisted by the RIAI, the iconic Diving Bell on Sir John Rogerson’s Quay and the Holy Faith Spirituality Centre in Glasnevin.

Bingham says that the two projects – one in the field of urban planning, the other a stunningly designed fresh build, are perfect examples of where the firms traditional strengths lay.

“I’m a trained architect as is Michael – Seán O’Laoire architect is also one of the country’s leading experts in Urban Design, so we are delighted to be working on some fantastic masterplanning and architectural projects, which compliment the great work we are also doing in fit out”, he says.

The Spirituality Centre, built in the grounds of the Holy Faith convent in Glasnevin is a particularly striking design for a client, the Holy Faith Sisters, whose site is quite a city oasis.   They are Bingham says, “great clients to work with and very brave ladies”.

While the firm is looking forward to the night out at the awards ceremony, Bingham,  O’Carroll and their team are already focused on the next dozen projects the firm has on its books, including designing the Town Centre in Cherrywood, who they also worked on the master plan for the area on. It is a different market and different clients now than it was a decade ago.

“What is interesting is that the new REIT clients are developing apartments not for sale, but to rent.  Instead of having a Nurse and a Garda as a landlord you get a very professional team, and there are many perks that come with that”, he says.

The other big change that Bingham sees is in the commercial end of things – “There is a rush to build 3,000,000sqm of office space, with high floor to ceiling heights and we are lucky enough to be involved in One Windmill Lane with Hibernia REIT, which is a great project and will completed next year”, he says.

Whatever the outcome of the RIAI awards, it is clear that MÓLA is here to stay and is as well managed and astute as it is passionate about design – a new firm for a new age with roots and experience that will be invaluable in the years to come.