It’s always a sign that a family is doing well – the decorations get bigger and brighter around the holiday season and they spend a pretty penny tastefully decorating their house with white lights to bring some holiday cheer.

It’s a slippery slope though – pretty soon the neighbours on the street realise that their holiday wreath on the door and tree in the window doesn’t cut it. The next thing you know there is an arms race of fairy lights, flashing Santa’s and ‘Frozen’ characters across the front garden.

This year around Dublin City it’s much the same story, with building contractors taking their decorations seriously and lighting up their giant construction cranes across the skyline of the city.

High above the shuttering carpenters (some Joseph’s among them), site engineers and foremen, the crane stands as the identity of the job site and at Christmas time, it’s all about lighting it up.

It is an incredibly visible sight too, as with a low rise city the cranes have before the stand out sign of Christmas cheer from all over the city – they literally reach heights that a Christmas tree never could.

Many contractors and firms have made an effort to spread the Christmas cheer this year, but Wall’s have made the biggest push, with extensive lighting and their familiar “Walls” brand illuminated signage. 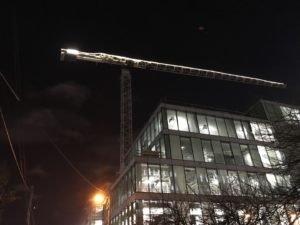 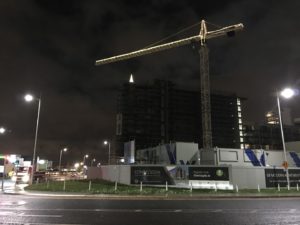 You can check out the Wall’s offerings at their Central Bank and Dublin Landings projects on North Wall Quay, the new LinkedIn HQ building at Wilton Place, or the Maple Residential Development in Sandyford.

The added bonus? They will be well lit up for any low flying sleighs this Christmas…