It is exciting times for Kevin James, Anthony McCarthy and the team at Cogent Associates, the project management, cost management and consultancy services they head up. If the James & McCarthy names are familiar, but Cogent Associates are not, there is good reason – the pair have just launched a rebrand of the company which has been in business since 1999 and which they quietly acquired late last year.

James & McCarthy entered discussions with Gardiner & Theobald LLP, the parent company of Gardiner & Theobald Ireland, about running the business as an independent entity in the middle of last year. The discussions went well and agreement for the pair to acquire the business was reached by the end of November – but in many ways that was just the start of the process of setting up the new entity on the right footing, as they describe it:

James, who started with G&T in London over 20 years ago and MD of the Dublin business since 2007 said “A partnership with Anthony was inevitable as we have worked very closely together for many years. Our early years in Dublin coincided with Ireland’s worst recession and our focus then was to develop a core team for the future and deliver a quality service. Today, we continue to work with those same valued clients who include; Google, Aldi, SAP and who provided us with repeat opportunities during those difficult years”.

McCarthy added “Since November, we have been working through a transition of rebranding, setting up a website, investing in a new IT infrastructure which is probably the most time consuming and complex – after 20 years of working on a set of systems, upgrading to something new takes a lot of research and work”, he said. 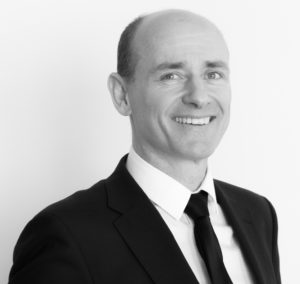 All of this, of course, while continuing to work for existing clients and to bring new ones into the business. McCarthy and James are keen to emphasise that the process of separating from Gardiner & Theobald was an incredibly amicable one – Cogent Associates will now trade as a wholly owned independent firm, but will still work in association with Gardiner & Theobald LLP and act as their de facto office in Dublin.

Cogent has an impressive track record and the pair have successfully delivered a significant number of high profile projects, including the Central Bank of Ireland’s HQ, Google EMEA and Paris HQ, State Street Bank, the Cork School of Music, the Shelbourne Hotel, Herberton Regeneration, and Adamstown SDZ infrastructure.

Many industry insiders have emphasised that the team that James & McCarthy have assembled and the quality of the work they do is the reason that the company is in such good shape to strike out alone. James says that both staff and the existing client base have been incredibly supportive of the move and it helps that Cogent Associates have already expanded since last November with plans to expand their workforce further by the end of the year.

“Our staff are very supportive of us which has been great. We recently promoted two senior Associates to Director level and we intend to further strengthen our core teams and consultancy services offering. Our development monitoring and facilities management have expanded, including MEP cost management services. By the end of the year, we hope to have over 30 staff employed. Our clients, when told about the move to a separate entity, gave us great feedback and support”, said James.

The breadth and scope of the experience in the company are significant and covers everything from small/medium sized projects to large scale developments for some of the largest known developers and landlords in the country. Describing all aspects of the company’s wide business experience is impossible, but McCarthy helpfully covers some of the highlights.

“We do public and private sector work covering all sectors of the construction industry. We recently completed the new Central Banks Headquarters on North Wall Quay which we are particularly proud.  It’s a BREEAM “Outstanding” development.  Also, over the past several years we have delivered in excess of 100,000m2 of commercial space for Google in Ireland and Europe and over 75,000m2 of retail space for Aldi, nationwide. More recently, we are delivering a number of student accommodation projects in Dublin, Galway and Cork and a number of commercial/retail and residential projects for several Irish and International clients.” McCarthy said.

While the company is active in these projects it is also working for public sector for Housing clients including; Cluid Housing, the largest housing association in Ireland, as well as homelessness charity Focus Ireland.

These are clearly exciting times for Cogent Associates and the new principles clearly have big ambitions for the already strong and striving team they are now solely responsible for. The process to get to this point may have been a hectic and time consuming one, but the pair seems completely invigorated by the process.

“We believe this will give a new energy and focus to the business. We look forward to continuing to work closely with G&T LLP while also continuing to develop the world-class offering that Cogent Associates stands for”, said James.

“Cogent Associates may be a new name, but the experience in the company puts it in good stead to capitalise on busy times ahead. It is also great to showcase our projects on our new website” said McCarthy