Property developer Sean Mulryan has signalled his interest in the Irish Glass Bottle Site in the Poolbeg peninsula in Dublin, which is expected to see the provision of up to 3,000 homes.

In an interview with Newstalk, aired on Friday, Mr Mulryan said hisBallymore Group would “absolutely” be going for the 24-acre site which has been under the control since 2012 of a receiver appointed by the National Asset Management Agency. 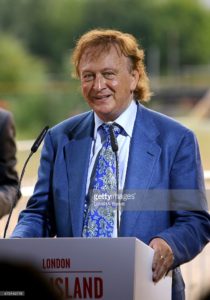 “A lot of people are going to be interested in that. It’s a significant site. It’s going to be a big opportunity,” Mr Mulryan told the broadcaster, adding that Ballymore would “absolutely” be among them.

In May, the Government agreed that redevelopment of the site would be “fast tracked”, which will allow Dublin City Council to grant planning permission that cannot be appealed by An Bord Pleanala.

The site’s original purchase for €412 million by a group including developer Bernard McNamara and the State-owned Dublin Docklands Development Authority became a symbol of boom-era hubris.

Nama has signalled it is eager to finally get development under way, almost a decade later. The lands will be used mainly for housing, with about 30 per cent commercial and retail development.

Meanwhile, Mr Mulryan said Ballymore, which aims to have paid back all its €2.6 billion Nama borrowings by the end of this year, will be cushioned from an expected slowdown in the London property market after Brexit.

He said that 80 per cent of the company’s London exposure is in the “middle market” of two-bedroom apartments, with 20 per cent in the higher end, which he sees bearing the brunt.

“Brexit will have an impact short term, but the top end of the market had overheated two years ago… Brexit or no Brexit, the high end of the London market was going to have a major correction and that’s going to happen now,” he said.

In the meantime, Ballymore will continue to focus on the middle market, where it has 4,500 apartments sold forward with deposits.

“We have a cushion for the next three years,” he said.