The project management division of Lafferty, which has worked on high-profile schemes such as Dublin’s Dundrum Town Centre and Bord Gáis Energy Theatre, is diversifying into the regions by opening offices in Cork and Galway.

John Rattigan, managing director at Lafferty Project Managers, said the move was part of the company’s strategy for sustainable growth. 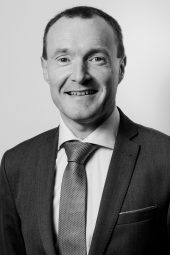 “We became aware that there was more activity starting in the regions with some Dublin-based clients and it made sense for us to take on that opportunity,” Rattigan said.

“We have a plan in place to explore other sectors in the regions, such as industrial, food and beverage, private healthcare and medtech. Our purpose there is not putting all our eggs in the one basket.”

The company has two divisions – project management and architecture – with a total turnover of around €8.5m. Just over half relates to project management. “We’re really focused on building a business that is going to stand the test of time,” Rattigan said.

“We’re not trying to feed a boom. I think that’s generally the view in the industry; everybody wants to see a sustainable development of the sector.”

He said he did not believe the risks which led to the last crash were present.

“We find this current cycle of capital investment is very different than the last cycle,” he said.

“So the funding model is very different. The last time around, it was much more a builder and developer profile, and our own banks providing funding for projects. This time around, there’s a lot more institutional investors, REITs, real estate organisations – so very finance-orientated.”

The firm turned its focus toward foreign direct investment during the recession and has worked with companies such as Twitter, Facebook and Yahoo.

“A lot of the US companies like to have a one-stop shop. The model in the US is that one company does everything. The model generally in Ireland is that you appoint an architect, an engineer, a quantity surveyor, a project manager. We bring them into one, so Lafferty has a full service offering,” Rattigan said.

The company is working on a number of student accommodation projects – equating to 1,250 beds at present – although growth in this area is starting to tail off, he said. “There is quite a bit of supply and I would say too that the site costs have got to a level where viability is challenged,” said Rattigan.

Lafferty has overseen several large projects and Rattigan said the Irish schemes were more than capable of being delivered within budget and on time.

This issue came into focus early this year when the scale of the over-runs on the National Children’s Hospital was revealed.

“There is a lot of international investment coming into Ireland at the moment and I would argue that they (investors) are having a broadly positive experience,” he added.

Established in 1997 by Pat Lafferty, the group employs 60 people. Bernie Cullinan, CEO of Pragma Advisory recently took over as chair of the company.