The building, which is soon to be HubSpot’s EMEA HQ, is a stunning development with views over Dublin’s Silicon Docks and with breakfast sponsored by C+W O’Brien, the 4th floor was humming with activity as 250 women from across the industry networked from 7:15am to 8am.

The Dublin Rising panel discussion highlighted the challenges that the industry is finding with implementation of the new Urban Planning and Building Height Guidelines issued by the Minister’s Office in December 2018, in many cases due to resistance from local councils.

The panel was led by WPCI’s Valerie O’Keefe, and began with a very frank admission from Eoghan Murphy that the primary driver for the new regulations on his part, was guilt. 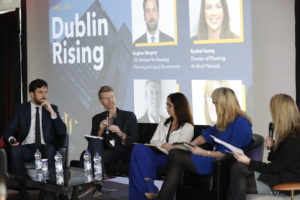 “One of the key drivers of changing the planning guidelines for Dublin City and urban hubs nationwide, was guilt. As a councillor in Dublin City for 18 months before I became a TD, I think that as councillors we were captured by nimby-ism and when I became Minister and when I reflected on that time, I felt that we had made the wrong decisions as councillors”, Murphy said.

The Minister’s assessment that local councillors are very often driven by a sense of what their voters want, rather than making an informed decision of what is best for their voters seems to still be commonplace according to Gary Cooper, Development Director at RGRE. According to Cooper there is resistance to the new planning guidelines from councillors which may take 2-3 years to work through, on projects that could start tomorrow if the guidelines were embraced.

“We would like the Minister to put a clarification to councillors about the guidelines. It is very frustrating as we have the ability to build with greater height in areas of the city, but only with the support of councils and right now that is not there”, Cooper said. 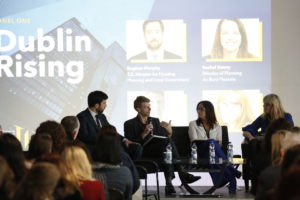 Rachel Kenny, Director of Planning with An Bord Pleanála agreed that some of the issues raised by Cooper will take quite some time to work through.

“The new guidelines will take effect as they work their way through the planning authorities. This could take in some areas 2, 3 and even 5 years but it will lead to better standards of building, better properties and when you build up more, it means that you can allow for more green space in between those buildings”, Kenny said.

Without a will to adopt the plans Cooper said that the city will ultimately suffer as it will not be able to meet the needs expected of a global city – one which many in local government are not well versed on.

“The Dublin councils need to realise that we are now dealing with global issues as well as local issues and that requires a dynamism in the local government. Councillors need to understand that Dublin is now competing with cities like Barcelona, Amsterdam, Rotterdam for jobs, residents and revenue – cities that protect their historical areas like the Georgian Quarter but also has development up to 35, 40 floors in other areas. If they don’t realise that, Dublin City will suffer when the next recession comes”, Cooper said.

Carol Tallon, CEO of Property District told the audience that she had a strong sense that those involved in urban planning over the past 30 years were unwilling to take risks and that for generations, the “visionaries had been replaced by functionaries”. She said that it was imperative that this change if Dublin was to survive.

“Our skyline needs to be shaped by visionaries and we also need the younger generation of Dublin to realise that they are part of a dynamic and changing city, not restricted by its shape at this or any point in time”, Tallon said.

Regarding the housing crisis that has faced the capital for the last decade, Minister Murphy said that it was crucial that under-utilised land within the M50 be re-zoned for housing and that the councils realised this.

“If you look at the aerial view of Dublin City, there is a large triangle within the M50 which is low density, mostly industrial buildings being used to sell cars, vans and mattresses – but it already has the LUAS, it is just off the M50 and it’s close to existing communities. A major change of use needs to take place in that area, to develop a mini-city inside the M50 and Dublin City Council is aware of that”, Murphy said. 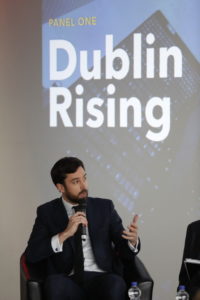 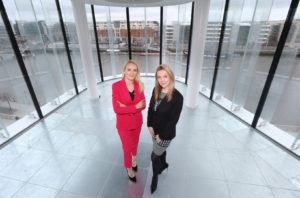