Construction professionals gathered on Thursday evening in the Marker Hotel in Dublin to discuss the outlook for the industry in 2020.

The discussion formed around AECOM’s annual industry review which was launched yesterday and featured key areas such as infrastructure’s role in sustaining economic growth,  the social impacts of our buildings and designs and climate change.

On the impact of climate change, Niall Gleeson, Managing Director of Irish Water said, “Climate change is inevitable and will have significant impacts on Ireland, from the availability and sustainability of our resources, including water, to the operation of our infrastructure. We need to look at our natural resources and future-proof accordingly. As one of the largest energy users in the country, we are particularly conscious of the need to reduce our carbon footprint by finding new ways to optimise existing technologies, such as solar panels, and new innovations to power our critical infrastructure.”

A major concern which was highlighted by attendees was Ireland’s ability to sustain the resources required to deliver the National Development Plan and to complete large infrastructure projects such as Metrolink and DART and rail expansions. This was supported by a finding in the report that suggests that 33% of construction workers are not convinced we currently have sufficient infrastructure in place to sustain economic growth.

Lara Poloni CEO EMEA at AECOM said, “it was very interesting to hear the concerns of industry  in Ireland, from access to talent, addressing climate change and safeguarding projects – these are common concerns across many countries in EMEA”.

“Considering Ireland is in the middle of an election; I can understand why industry is concerned about the longevity of ‘Ireland 2040’ and about resourcing being safeguarded. This is becoming an issue across all countries, as we continue to see more and more single-term governments.”

“Mega infrastructure projects, like the one Irish Water is undertaking, require continuity of commitment to ensure that the work carried out will sustain the ever-changing requirements of an increasing population.”

Speakers made the point that elections are not won on funding promises for wastewater treatment plants or expansion of roads and these budgets are competing against schools and hospitals, often resulting in developments being postponed/cancelled due to resourcing. This was in response to attendees questioning if our economy would sustain itself to ensure the completion of the vital projects that are underway in Ireland, such as upgrading our water network, expanding our transport and creating accessible communities for housing. 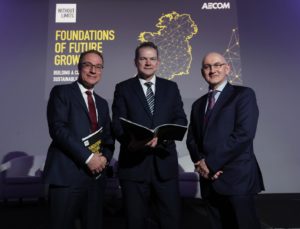