Property consultants CBRE Ireland have today released figures for the volume and value of development land traded (both on and off-market) in the Irish market during 2019, which shows that 73 land sales were completed in Ireland during 2019, totalling more than €1.2 billion between them.  While down on last year’s record result (almost €1.5 billion in 125 transactions), this nevertheless represents a strong result, particularly considering the fact that land prices have stabilised during the last 12-month period. In total, according to CBRE’s research, almost €6 billion of land sales have been completed in the Irish market in the last decade of which 45% occurred in the last two-year period alone. 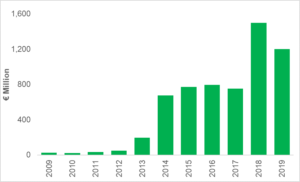 Peter Garrigan, Director in the Development Land team at CBRE said, “Activity in the Irish development land market during 2019 has been steady with a number of large sales having completed in the last quarter bringing total spend during the year to more than €1.2 billion. In addition, a number of land sales will now not complete until the New Year, meaning there will be a carryover into 2020. We continue to witness strong demand for well-located sites although there have been clear signs of stabilisation emerging in terms of land prices during the last year”.